I see colors. Really. Not only around me and on the screen, but also, fore-mostly, in my mind. I cannot not see colors. As a child I used to ask people: “But if your day has no color, is it then transparent? Or like a mirror?” And my mother had no idea what I was talking about. Later I discovered that it’s something only a small part of the population is experiencing.

The forms I do have clearly, are the color-graphemic synesthesia (letters or numbers perceived as colored) and spatial-sequence, or number form synesthesia. In the last form, numbers, months of the year, and/or days of the week elicit precise locations in space or have a (three-dimensional) view of a year as a map (clockwise or counterclockwise- in my case both which always confused me).

More slightly I have the visual motion – sound synesthesia, which involves hearing sounds in response to visual motion and flicker. In my case vice versa.

Actually I also have a mix of the above mentioned types, because I can see specific letters in specific colors and shapes moving in a specific way in a specific part of space – still following?

The week consists of rectangles put together like columns of the same height and width. It starts with Sunday on the left, which is yellow, and ends with Saturday on the right, which is dark brown. I see these blocks from above, like upside down. It would be hard to ‘read’ them. Because of the depth the evenings are actually a bit wider, because closer to me. They are also much more clear. True, I’m not a morning person! 😉

The year is like a snake which is laying in not a perfect circle. And he/she is cut in two places: between November and December and between March and April. This winter part is laying in opposite direction. It’s put in the same circle, but with some space in between. Like it’s not really fitting anymore.

But I’m not suffering from winter depressions (although I’m happier in spring because the circle slides down again and the colors of the months are better). 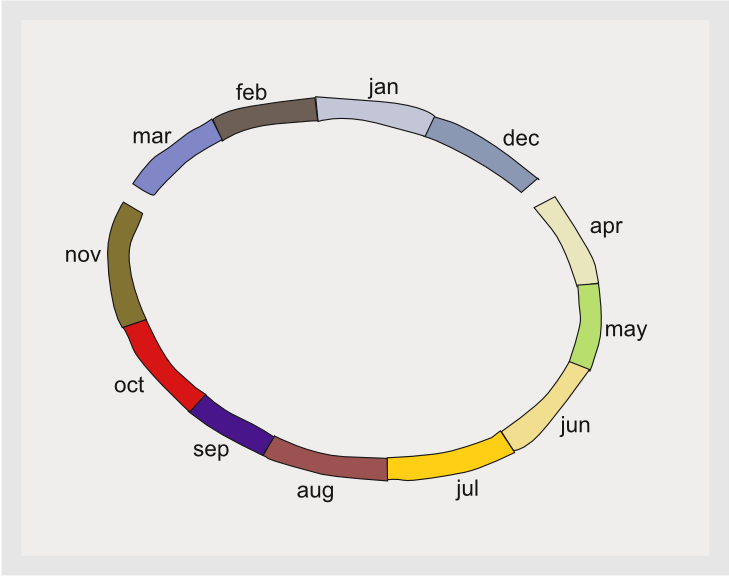 Like all synesthetics: I am born with it, it has always been like this and will probably always be there. For me it’s mostly nice and I can’t imagine how it is to see ‘nothing’.

See also posts on the theme.